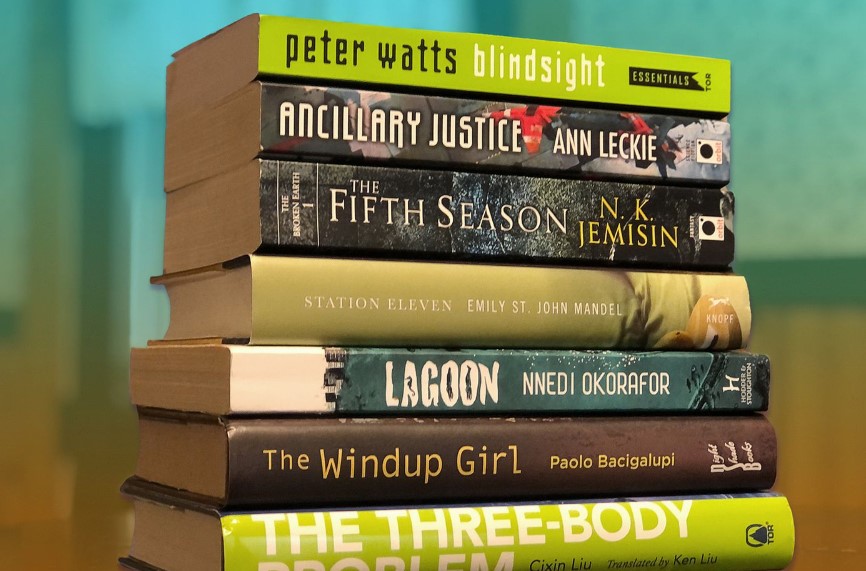 When you ask for sci-fi book recommendations, people often shout out the names George Orwell, Isaac Asimov and other authors who were at the peak of their over half a century ago. Here are some more modern books that show that the genre is alive and well, and continuing to inspire readers.

This series by Susan Collins follows Katniss Everdeen, a girl living in a dystopian future where the poor toil endlessly for those living in the wealthy Capitol. When her sister Prim is picked to enter the titular Hunger Games, a televised fight to the death, Katniss takes her place. The series explores themes of social inequality and ethics around media, war and resistance movements.

Cormac McCarthy’s most popular novel doesn’t feature high-tech gizmos or spaceships, but a hopeless, barren landscape and a father and son’s journey as they try to navigate it. It’s a brutal vision of post-apocalyptic America, but at its core, it’s a story about love and how it can keep you going when there is nothing else to live for but each other.

This entry on the list is a blend of genres, with elements of thriller, fantasy and of course sci-fi. When earthquakes threaten to shake civilization apart, Mark Joff is called to the Himalayas to try to figure out why, and if it can be stopped. Both Bill Copeland books in the Cosmic Swan series ask the reader: can humans save themselves from their fear and ignorance?

After being left for dead on Mars after a dust storm, Mark Watney is determined to survive his situation. Unfortunately, he has no means to contact NASA to tell them he’s alive, and when images of the planet’s surface reveal as much, people back home have no means to tell him they know. Andy Weir’s novel is infused with wit and, at times, humor.

Sci-fi is a very diverse genre. No matter your thematic preference, there is a book for you.